I Met Greg Bear and You Didn’t 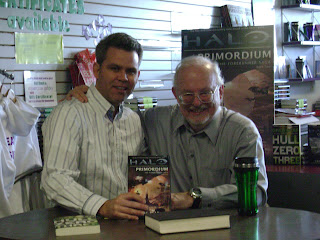 I went to Mysterious Galaxy bookstore to meet Greg Bear and hear him speak. He's currently on a book tour promoting the second edition of his Halo book series, Halo Primordium, which is based on the mega popular video game. 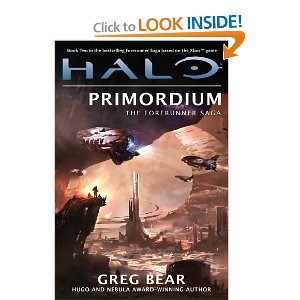 During his talk, he was nice enough to introduce me to his fans as the grandson of his great friend, mentor, and colleague Elizabeth Chater. He also gave some history of their relationship that I found incredibly interesting.

Back in the 1960's my grandmother went to work as an associate professor at SDSU, and a then 19 year-old Greg Bear took one of her courses and was immediately impressed with her teaching style, and by the fact that she was a published science fiction pulp writer. He went to her and suggested they start a course in science fiction writing. The obstacles were many. This would be the first such course taught at SDSU--in San Diego, in California! She was a woman in a professorial boys club. And the English department had an up-turned nose for any mention of science fiction. She and Mr. Bear went forward with it anyway and started a science fiction creative writing course, making 100 slots available. 200 people showed up. The class was enormously popular and continued to grow in popularity for nearly a decade. They even had Rod Serling, Ray Bradbury, and Harry Harrison come to speak to their class.

It's no accident that, because of the pioneering efforts of my grandmother and Greg Bear, the epicenter of science fiction in the world, Comic Con, is now held in San Diego. They, and a handful of others, blazed a trail for science fiction that has made it, according to Gregory Benford, the “Defining genre of the twentieth century.”
Pretty sweet.

I was also impressed with how friendly Mr. Bear was— I'm going to call him Greg, since he and I are now BFF's—and how wise his council was to the some of the other writers and teachers in the crowd. His key to success: Don't give in to convention. Study the classics, learn from the masters, but don't succumb to current popular opinion or scientific flavors of the week. The parochial world of science can sometimes smother innovation. I think this is good advice, and, foolishly, I was almost surprised to hear it from him. I had expected him to say something more academic . . .  but now I see why he's a pioneer in the field and a bestseller.
Posted by Christopher John Chater at 1:12 AM 3 comments: