Too big to fail

I'd like to officially announce the release of my new book cover for The Traveler's Companion. One of the great things about self-publishing is that if you don't like something about your book, you can change it. I wonder how many traditionally published authors had covers they hated but couldn't change. What if the printer made a mistake? What if your name was spelled wrong? Like Chatter instead of Chater. Everyone could be calling me Chris ChaTTer like my teachers always did in role call. Really used to annoy me.
I was also advised to not be afraid to try a different cover if one wasn't working. I liked the old cover, but after putting it up on a critique site, there were several negative comments.
I made this new cover using Gimp and it cost me nothing, only time. The handsome devil on the cover is yours truly. I borrowed some luggage from a friend, put on a suit, and Jessica and I went to the park to take some pictures. I think it came out pretty good. 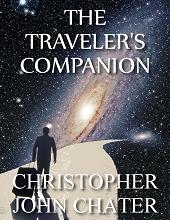 In other news, the Big Kitty gave us quite a scare the other day. We rushed him to the vet and the doctor told us he might have a tumor in his lungs. They ran a variety of test and it turns out it was nothing; we'll be bringing him home tonight. I've always known Big Kitty is too big to fail.

What do you think of the cover?