Imagine you were a woman that spent a lifetime wanting to write science fiction for a living, but you couldn't because it was a male dominated profession. At nearly fifty years old, you try your luck at publishing something in a magazine called Fantastic Universe, a big deal in the sci fi community at the time, and not only is it accepted, but you form a relationship with the editor and he wants more of your work. The rub? It's accepted and published under a pseudonym, the masculine name Lee. My grandmother published four stories with Fantastic Universe in the late fifties under the name Lee Chaytor (she feared people would pronounce her last name CHATTER.)  But even as late as the 1980's, sci fi was still a male dominated world, despite luminaries like Ursula K. Leguin. Because she knew she'd have a better chance publishing romance novels, she had no problem writing and publishing twenty-two of them in eight years. But she continued to write sci fi in her free time.
One of the best things she had ever written of any genre, according to her, was a book called The Big Sling. It's amazing to me that someone could publish twenty-two books, but her best work sat in a box in the closet because society couldn't handle a female writer. No longer is that a problem. Those were the old days. In today's market, with self-publishing rapidly becoming more respectable and certainly profitable, it doesn’t matter who you are or from whence you came. When people ask, "What's so great about self-publishing?" I tell them this story. Because now, for the first time, people will be able to read my grandmother's book. For decades it was stored in a box, nowhere near a bookstore where it belonged, but in a few weeks The Big Sling by Elizabeth Chater will be everywhere eBooks are sold. And it will be published by a family owned publishing company called Chater Publishing.
It's an awesome time to be a writer. 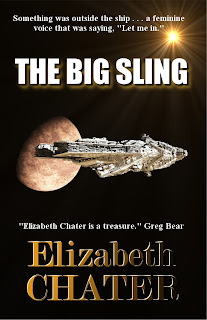