Omegasphere is finally available on Smashwords! It should be up on Amazon in the next couple of days. This is a psychological thriller, but the core theme of the book is about where ideas come from.

I had a friend years ago who asked me where I got my ideas. It's an odd question to ask a writer, because the truth sounds sort of corny. The reality is we don't really know . . . yes, everything a writer does goes through the filter of his own personality and experience, but we don't know where the original idea comes from. God? The universe? The media? My guess is that it's probably all of the above. In the case of Omegasphere, I examine several possibilities through the characters Ursula and Kurt. Ursula is a memeticist, a scientifically minded cynic, and Kurt is a science fiction writer who is more open to mystical and paranormal concepts. Memetics is the study of how ideas spread in a culture, the brain child of controversial atheist Richard Dawkins, who began the study as a way to augment Darwin's theory of evolution using social  phenomena, such as how ideas are passed from mind to mind. To simplify the science, one person gets the idea to cook food, and then the idea is copied or mimicked by someone else. Soon the idea spreads throughout a culture or society, eventually reaching critical mass when everyone is cooking their food. The idea makes society as a whole healthier; people live longer and thus they have more time to pursue intellectual pursuits, which of course helps mankind to evolve.

Sometimes the ideas are copied incorrectly.They mutate while being past from host to host, and this creates a problem. The media makes its living this way, spreading half truths for political and or financial gain.Think of urban legends that exist for decades, even centuries, and influence social thinking without people even being aware of it! But there are great examples of ideas that make life better. Because someone came up with the idea for an ereader, one can now sit in relative comfort and read Omegasphere for only 2.99 on Smashwords :).  My hero wants to figure out where ideas come from originally. . . and when he's suddenly given remarkable extrasensory abilities, he's on his way to finding out.

Here's the description for the book:

I'd like to dedicate this book release to my brother, Kerry. Get well soon, bro. 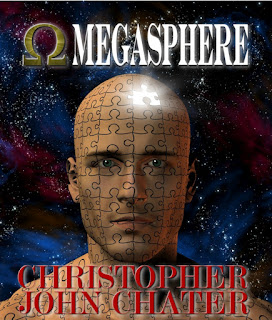